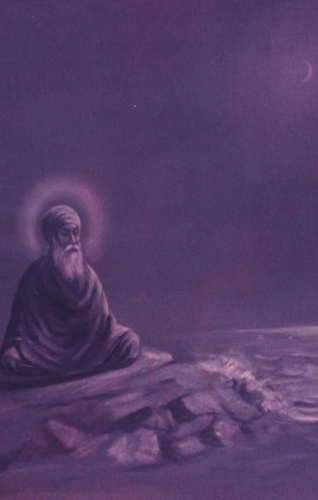 “Find me not in temples of stone; But in your heart, O’ devout!”

As per history and janamsakhis, Guru Nanak came to Sri Lanka during his Second Udaasi (journey).

The route taken was from Puri to Gantur to Kanchipuran to Tiruvannamalai to Tiruchchirupalli, and sailing all the way from there to Batticoloa.

My search for the ”charan padak”- the place where he set foot – took me to The Archaeological Survey of Sri Lanka.

There are no records of a place called Dibar, some seven odd miles from Batticoloa, where the Guru set foot for the first time in this island nation.

Conflicting reports off the internet pointed me towards Trincomalee, and I set off to search the land there. The east coast of Sri Lanka – the famed Shaivite kingdom where the Guru was welcomed by the Hindu ruler – welcomed me with a smile.

Torn by the recent civil war, this region shows marks of a painful and bloody era, that is now the latest addition to the history books. It tears my heart to see that this holy place, which supposedly marks the first step of Guru Nanak, the Prince of Peace, in the land of the Buddha – the preacher of ahimsa – bears so many marks of suffering, torture and destruction.

With no leads on the temple linking to the Udaasi Mutth, which is supposed to have the Mool Mantar written in the Sinhala script, I reach a dead end. In various conversations with people from the area.

I reluctantly come to the conclusion that tsunamis in the past and coastal erosion could have been responsible for erasing all links.

Some even point towards the strict religious sentiments of the Sinhala Kings or the destruction caused by the Portuguese invaders. What stand there today are two ancient temples dedicated to the deity, Shiva – the “Destroyer” of Hindu mythology.

Constant badgering of the personnel at the Archaeological Survey offices is also not helpful as no one knows of any stone inscription bearing the name “Nanakacharya” which was said to be at the Anuradhapura Museum.

The search takes me to Anuradhapura, one of the glorious ancient capitals of Sri Lanka. I pass towns and villages with their Christian churches, Hindu kovils, Buddhist viharas and Muslim mosques.

I remember the Guru’s teachings of a universal God. All living here in harmony and praying to this one God in their own ways. I draw a blank at Anuradhapura too and feel a bit disheartened.

My restless mind looking for footprints from the Guru’s journey across the ocean, and then it dawns on me that it is not in the temples of stone or ancient scriptures that I can find him, I can find him within me and within the hearts of so many Sindhi settlers from Pakistan, who migrated to Sri Lanka during the Partition of 1947- with images of Guru Nanak, and the presence of Guru Granth Sahib and the teachings in them.

Here, they were blessed by the Guru and started a life afresh with all the dedication and humility that symbolizes Guru Nanak. Every Year, on Guru Nanak’s birth anniversary, a beautiful darbar is held at the Sindhi Community Centre on Galle Road in Colombo.

Kirtan by the sangat is followed by parshad in His memory, and then, langar.

The author was born and brought up in Amritsar, Punjab. Married to Maninder Singh Bakshi and a mother of 2 boys, she has been living in Sri Lanka since 2000. An MBA in International Banking and Finance, she is currently teaching in an International School in Sri Lanka.