Was It A Riot, Or Was It A Pogrom?by ARTIKA BAKSHI 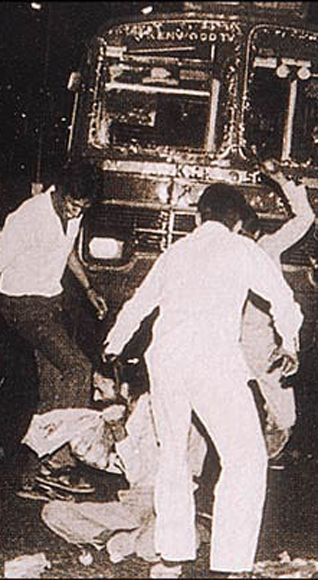 Shashi Tharoor – a man of many words. Many meaningful words, that hit a chord every time they are expressed.

Having heard him speak during his time at the UN and on his entering mainstream Indian politics, he has impressed me. Here was a man who actually said it the way it was.

It deals with the Hindu-Muslim riots in India as an aftermath of the criminal demolition of the historic Babri Mosque by right-wing Hindu mobs, setting it against a background of Indian markets opening to big multi-national corporations like Coke, Walmart, etc.

He takes you through the events with a series of interviews, as well as notes from journals kept by the protagonists – Priscilla Hart and V. Lakshman: an American NGO worker in love with the subcontinent and all it’s drawbacks, and an Indian bureaucrat, who works within the system but with suppressed romanticism lying somewhere deep within him.

Through this well-narrated tale, what particularly struck me was the character, Gurinder Singh, Superintendent of Police. An upright Indian Police Service (“IPS”) officer and a St.Stephen’s College product, who curses, swears, jokes and enjoys his drinks strong, and easily comes forth as a hero.

The bureaucrat holds his advice to heart and values his sincere friendship.

The reason Gurinder gives for joining the police force holds true, or should I correct myself here, held true, in the dreams of thousands of families in rural Punjab. Most parents have dreamt of their turbaned boys joining the Indian Adminstrative Service (“IAS”), the IPS or Armed forces. Sikhs have always been looked at with a sense of awe – their integrity, their fearlessness, their commitment to defending and protecting the underdog …

Gurinder delves into the aftermath of the 1984 pgroms that left a mark on the heart of each and every Sikh and, I suspect, on any Indian who has fully understood the idea of, and dreamed of a secular and harmonious India.

For me, the 1984 pogroms are a faint memory, but Gurinder’s words left my heart cringing. We are given a quick overview of the birth of the militancy in Punjab in response to the state’s human rights abuses against the Sikhs, to the unnecessary sacrilege of the Darbar Sahib by Indira Gandhi’s troops, to the day she paid for her sins at the hands of her own security guards.

What followed was a massacre of innocent Sikhs across the lregth and breadth of the country, a blot on everything India claimed to be in its own well-cultivated public persona.

During the pogroms, when Gurinder Singh’s 10 year old nephew and brother-in-law are massacred by a marauding mob, he considers resigning from his job as a senior police bureaucrat. But he doesn’t.

His grieving old father stops him, saying that by staying within the law enforcing agency, he could work towards preventing such crimes from happening again. Thus ensues a bit of a dialogue on the duty of a Sikh to contnue to work for ‘sarbat da bhalla’, even when confronted by the worst in human nature.

However, the novel merely touches on the 1984 anti-Sikh massacres.

Unfortunately Tharoor –  an educated, intelligent and well-informed man that he is, working in the thick of the very political party which authored the pogroms – fails to distinguish the term “riot” which correctly applies to some of the aftermath of the Babri Mosque demolition, from what happened against the Sikhs in 1984: a pogrom and nothing even remotely akin to a ‘riot’.

It is odd that the author would bring up the 1984 crimes in a book titled “Riot”, and not highlight this distinction.

It was a golden opportunity – unfortunately squandered – to correct his fellow countrymen from the ongoing and intentional mischief of the repeated use of the misnomer vis-a-vis 1984.The motivation, obviously, is to dilute and minimize the enormity of the crimes. But the net effect is that the whole country confirms its boorishness in its relationship with its most patriotic segment of society.

The government, the country’s public intellectuals, the media, and therefore the people, have continued the fraud ad nauseum.

But the fact that Shashi Tharoor has failed to distance himself from the practice is in itself troublsome.

Maybe, just maybe, he’ll write a book soon under the title, “Pogrom”, and redeem himself.